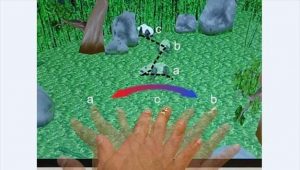 Birds may be able to sense the Earth’s magnetic field and use it to orient them. However, until now people have even been able to approach this property, which aspires to change researchers of “HZDR (Helmholtz Zentrum Dresden Rossendorf)” in Germany.

These researchers developed an “e-skin” with magnetosensitivity, sensitive enough to perceive and encode digitally the movement of the human body into the magnetic field of the Earth. As this skin is extremely thin and supple, it can easily be applied to human skin, creating the bionic analogue of a compass. This could not only help to orient people but also be used for interactions with virtual objects in virtual and augmented reality environments.

The results of the research were published in “Nature Electronics” -where Dr. Denis Makarov and his team’s researchers presented this technology- which reminisces, on the one hand, science fiction films such as the “Minority Report”, and on the other hand it does not need the bulky gloves, the special glasses and the rest of the equipment; enough are the electronic skin and the magnetic field of the Earth.

“We are talking about 40 to 60 microtesla, 1,000 times less than the magnetic field of a common magnet like those we put on the refrigerator”,

According to the researchers of “HZDR”, it is the first time to show such easy-to-use electronic skins capable of handling virtual objects through the interaction with geomagnetic fields, as previous demonstrations required the use of external magnets.

“Sensors allow the wearer to continually find his orientation based on the Earth’s magnetic field. So if he or the body member with the sensor changes orientation, the sensor picks up the movement, which is then transferred and digitized to be attributed to the virtual world. ”

As the sensors are extremely flexible and can bend and deform without losing their functionality, the researchers see enormous potential for their use, and not just as a means of interacting with virtual reality.

“Psychologists, for example, could look at the effects of magnetic field perception on humans with high precision, without bulky devices or difficult experimental conditions that would affect the results,