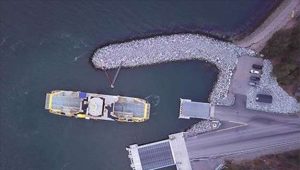 Sensors and cameras use an autonomous “Rolls-Royce” ferry in Finland to move on its own, to the point where it can tie itself to the harbor.

In the event of an emergency, it is possible to control it remotely, by shore-based operators, via satellite and internet telecommunication. Rolls Royce, which has developed the technology, estimates that sometime in the seas will move boats without crew, changing the data in shipping, as there will be more space for cargo and less energy is required.

The craft is also capable of locating and avoiding obstacles. As he told the BBC Oscar Levanter, innovation vice at “Rolls-Royce”, most accidents at sea are caused by human errors, many of which are caused by simple factors such as crew fatigue or simply the lack of presence of the crew member at the appropriate part at the right time.

“And here is where automation can help”,

Through special remote control centers, it is possible to take over the ship captains from a distance, where in the world the ship is. This control is possible through a special system that allows the remote controler to have a 360 degree picture around the boat, as well as all the capabilities he would have if he was on its deck.

The Rolls Royce is very active in the autonomous ships: Among others has shown in recent years plans for unmanned cargo ships and warships, which will be able to perform a range of tasks, such as patrols, mine detection or fleet protection.