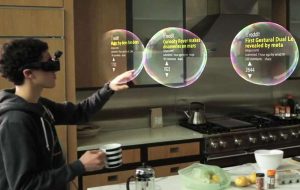 In one to two years from today, Huawei is estimated to have presented “Augmented Reality” glasses, after smartphones with “AR” capabilities.

Huawei reportedly endorses the view that the field of Augmented Reality is what will occupy us strongly in the near future for this and wants to be one of those manufacturers that offer the right equipment for the “AR” era.

Huawei is expected soon to present a pair of glasses that will have “Augmented Reality” features and give to those who wear them a wider field of perception and action, certainly greater than that enjoyed by a user of a smartphone with “AR”capabilities.

However, in order to prepare for the advent of more specialized “AR” proposals, such as special glasses, Huawei says it will focus on integrating the “Augmented Reality” features into as many smartphones as possible.

Huawei ‘s ambition is to become that manufacturer that will give the consumer a chance to become fully accustomed to “Enhanced Reality” technology before passing it from the smartphone screen to smart glasses.

Whether this technological experiment will be successful, it remains to be seen, but it is certain that it already attracts the interest of big enough names from the high tech world.