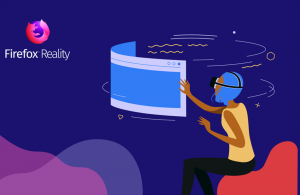 Firefox browser shows the tools it will use to enter into the era of Virtual Reality, as is the so-called Firefox Reality browser.

“Firefox Reality browser” can work in “virtual” and “augmented“ reality hardware, supporting “voice navigation features”. With the help of the “Firefox Reality browser”, one can see in other “interface” the classic content we encounter on the “World Wide Web”, as well as the content created according to the rules of “Virtual Reality” and “3D content display”.

As “New Atlas” reports, Mozilla‘s creators say they had to think completely different about how to design such a tool, while the basic source of “Firefox Reality browser” design was the “Mozilla Quantum” engine due to the increased speed it offers.

However, in the new browser, one can find almost all the features it finds in the simple “Firefox”, such as the “private browsing” feature.

Initially and at an early stage, in which its development is, “Firefox Reality” is available in the online app stores: “Viveport”, “Daydream” and “Oculus”, respectively for “VR helmets” placing on the market.