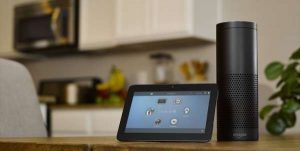 The new, even more “intelligent” speaker Echo, with the voice of “Alexa”, presented by Amazon, and other devices with “intelligence”, such as the first “smart” microwave and more “gadgets”, in an effort to keep in the forefront in this area compared to competitors “Apple” and “Google”.

All devices are controlled by the voice of the embedded personal digital assistant “Alexa”.  The objective of Amazon is -as the era of “Internet of Things” emerging- to penetrate all houses and make “Alexa” the dominant platform in a “smart” home, as is already Windows to computers.

The presentation of new products, which was made by David Lamb -vice president of the Company- at an event in Seattle, included the updated speakers “Echo Show”, “Echo Dot” and “Echo Plus”, the new subwoofer speaker “Echo Sub” (for better bass sound), the new “Echo Input” (attached to the stereo system makes it ‘smart’ ), the new “Echo Auto” speaker especially for cars, a microwave with built-in “Alexa”, a “smart” wall clock etc.

Thanks to their advanced artificial intelligence and the new “Alexa Guard” security service, “Echo” devices can also hear and perceive any violations of the house by thieves (eg glass breakage) or an accident (eg crawling fire smoke), so that they send the relevant internet-based security signal to the outgoing owner.

The user will say something like: “Alexa, I am going, be careful” and “she” will take care of listening to and informing immediately of anything suspicious. At the same time, it will turn off the lights or the music left by the abstract owner.

A new feature called “Alexa Hunches” allows the personal digital assistant to think about the user before the user: as “she” watches the user’s home and writes his habits, “she” will make suggestions (eg about music or the a radio show that he or she will hear) or warn him if “she” “senses” that the owner has escaped his habits, eg. lock the doors before falling to sleep, or turn off the lights, or the TV that has been left on after some time.

Amazon has not revealed how many devices “Echo” has sold worldwide since 2014 that first circulated, however, it said that the “interlocutors” of Alexa worldwide is tens of millions.

According to the “eMarketer” survey company, nearly 41 million Americans will use “Amazon Echo” devices this year, compared to 31 million in 2017.

Nearly two-thirds of US “smart speaker” users will have an “Echo” this year, compared to 30% with the competing “smart” speaker “Google Home” (some users have both).

At the same time, its goal is to make “Alexa” as friendly and human as possible, capable not only of longer and more natural conversations with users but also of the appropriate adaptability (if, for example, the user whispering, doing this same).

And what about the sensitive personal data of each user? Amazon assures that “Alexa” encrypts them.