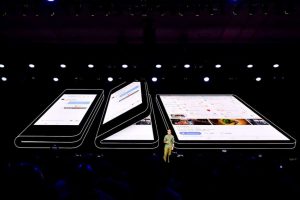 Android is also present in the new field of competition that now defines devices with a retractable and flexible screen.

Android -as the operating system used on the majority of mobile devices– could not help but move quickly to be able to include within those devices equipped with retractable screen, such as that recently presented by Samsung, but also the others that are being prepared to come up with other manufacturers soon.

In any case, developers will be able to rest assured that their applications will be displayed correctly, whether the screen is fully folded or not.

In special cases, such as watching videos, Google makes it clear that there will be no problem even during the screen wrap.

According to Google, in addition to Samsung , the list of manufacturers experimenting with the creation of smartphones with a flexible, retractable screen includes Huawei, LG, Oppo, Lenovo and Motorola.

From the beginning of next year we will have to expect several developments in this category, with several presentations of such devices.

Through a special post on Google’s Android developers blog, information is given about things to come in the Android world.