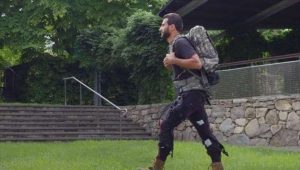 © naftemporiki.gr Soft, “smart” exoskeleton that adapts to the needs of the user

Exoskeletons are one of the sectors that are of great interest to the industry, as well as other areas, as they are offered for use-by workers in factories, soldiers, elderly people, etc.

In this context, there are many players in the industry; including Connor Walsh ‘s team at the “Wyss Institute for Biologically Inspired Engineering” at Harvard University and “SEAS (Harvard John A. Paulson School of Engineering and Applied Sciences)”.

These researchers are developing a range of soft, “wearable” uniforms that help in the movement by applying mechanical force to various joints, including ankles or hips; or, in the case of a soft multi-joint exoskeleton, at both of these points. Because of its potential use of soldiers on the battlefield, the American Pentagon’s “Defense Advanced Research Projects Agency (DARPA)” funded the team’s work as part of the “Warrior Web program”.

Although the researchers have shown that “lab” versions of soft exoskeletons can provide clear benefits to those wearing them, allowing them to spend less energy while walking and running, there is still a need for fully “wearable” outfits (exoskeletons), which can be used in the real world.

In this context, in a study presented at the “2018 IEEE International Conference on Robotics and Automation (ICRA)”, the researchers presented the latest generation of agile, multiple joints exoskeleton that has been improved in every possible way and tested on the field over long marches on a rough terrain. Also -using the same uniform- in a second study, published in the “Journal of NeuroEngineering and Rehabilitation (JNER)”, the researchers developed an automatic adjustment method that allows the uniform to customize/personalize the help it offers, depending on how the user’s body reacts to it; resulting in significant energy savings.

This uniform is made up of waste, thigh and calf parts. Through an “actuation system” worn near the waist -in a military-type backpack- mechanical forces are transmitted through cables, which are routed through the soft parts of the uniform to the joints, ankles, and hips. This enhances these points, helping to move the legs while walking.

The uniform was tested in co-operation with the “Army Research Labs”, with soldiers who tried it for 12 miles.