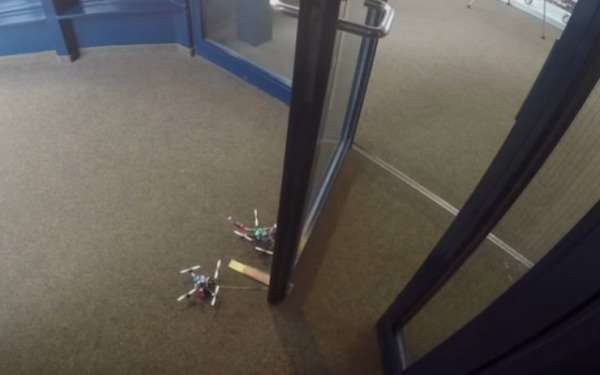 A closed door is a classic obstacle for a robot, much more for one flying in the air.

But not for “FlyCroTug”, a new US-Swiss tiny robotic drone capable of carrying objects much heavier than itself and overcoming obstacles like a door simply by opening its handle.

The “FlyCroTug” palm size has a special attachment mechanism that allows it to lift and carry objects up to 40 times heavier than the robot (eg a camera or a bottle of water in a rescue operation), and to adhere itself on surfaces, e.g. walls or doors.

Thus, two such robots in collaboration can throw a “lasso” to pick up a handle and open a door.

The innovative robot, which was constructed by the workshops of “Mark Katkoski” the “School of Engineering of the University of Stanford, California” and “Dario Floreano” the “Federal Polytechnic School of Lausanne (EPFL)”, presented at robotics magazine “Science Robotics”.

The researchers said that due to their small size, “FlyCroTug” can “drill” in narrow places and fly near trapped people, transporting supplies or other equipment (food, water, mobile, camera, etc.), something which makes them very useful in cases of natural disasters or war.

That is why the US military co-finances this research program.