More fast, more stable and with a whole new set of features will be iOS 12, the next version of Apple’s mobile operating system (iPhone, iPad). At least this was supported by US giant executives during the WorldWide Developers Conference (WWDC), Apple’s annual software developer meeting in San Jose, CA.

The surprise during the first day’s main speech, which included Apple Chief Executive Tim Cook, was that there was no announcement of a new machine. Many analysts and users of Apple products expected the US giant to announce something new and different in terms of at least the area of laptop computers, where Apple seems to have no desire to renew its range. Although it can not be excluded that awaits the fall for new announcements in order to be better positioned for the Christmas market. 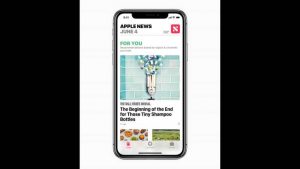 In the field of software and applications, however, Apple has announced significant upgrades to most of its core products. The iOS 12, available from autumn, offers greater speed in opening applications, and in addition there are new features in the augmented reality (AR) field. Siri becomes more intelligent and personalized as it will make suggestions for action on the part of the user, while the iOS 12 also has a number of features for controlled use of the iPhone or iPad, so as not to distract the user but also there is a way for a parent to choose exactly in which applications and for how long his child will have access. With DND (Do not disturb) turned on at night, opening the main screen to see the time will not be accompanied by the appearance of many alerts that will be hidden until the morning. The iOS 12 will also feature Memoji, virtual characters with animation ability.

Apple also announced the new version of macOS (10.14 Mojave), where what might be liked by many users is dark mode, where menus and settings have a much darker look! The new Safari makes more difficult the third-party data collection, with Apple’s people leaving enough peaks for both Google and Apple during the presentation.

Perhaps the most interesting announcement of the presentation was that from 2019 it will be possible for iOS applications to be made available to MacOS, as Apple’s two operating systems are coming closer.