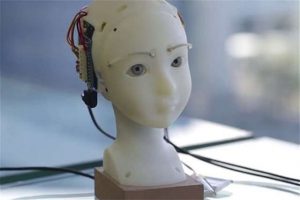 The eyes always tell the truth and by looking at someone in the eyes you can understand a lot about his personality and his psychology, or so it is called more or less. At the same time, their eyes and movements are one of the most difficult obstacles in Robotics and 3D animations, precisely because each move can represent a different expression.

We’ve seen a lot of humanoid robots in the past trying to achieve as much faith as possible in facial expressions, such as Sophia. However, if you notice the eyes and eyebrows you will immediately understand that something is wrong.

That is why SEER (Simulative Emotional Expression Robot) is especially important for Robotics and impressive for us observers,  is also incredibly expressive as you will see in the video below. The key to the SEER is in the eyebrows, and it turns out that the creators of humanoid robots will have to pay much more attention to them if we just want to touch a bit on Westworld’s terribly distant scenario.

This website uses cookies to improve your experience while you navigate through the website. Out of these, the cookies that are categorized as necessary are stored on your browser as they are essential for the working of basic functionalities of the website. We also use third-party cookies that help us analyze and understand how you use this website. These cookies will be stored in your browser only with your consent. You also have the option to opt-out of these cookies. But opting out of some of these cookies may affect your browsing experience.
Necessary Always Enabled

Any cookies that may not be particularly necessary for the website to function and is used specifically to collect user personal data via analytics, ads, other embedded contents are termed as non-necessary cookies. It is mandatory to procure user consent prior to running these cookies on your website.