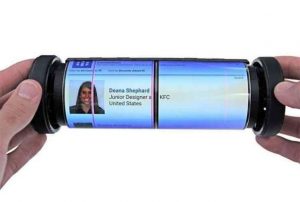 Researchers in the UK have created MagicScroll, the first touch-screen tablet computer, folding like a roll, reminiscent of an ancient papyrus (hence its name). The new invention is pushing even more beyond the boundaries of flexible device technology, opening up a new range of capabilities.

The device, creation of mechanics from the University of Queen’s, has a 7.5-inch flexible display with high-resolution 2R, which can be rolled and unrolled around a central cylindrical shaft, which is produced by a three-dimensional printer, comprises a processor and other computer components.

Two rotating cylinders at both ends of the center cylinder allow the user to roll or unroll the touchscreen. Thanks to its lightweight, the device is more user-friendly than a traditional tablet. When the screen is wrapped in the cylinder, the tablet fits into a pocket and can also be used as a “smartphone” or pointer.

“We were inspired by the design of ancient papyri, as well as old filing systems with “roll-up”cards”,

The MagicScroll also has, as transmitting AMPE, one camera that allows users to use the tablet (with wrapped screen) as a control console through gestures, such as e.g. the Nintendo Wiimote. The next goal of the researchers, as they said, is to reduce the device so that it does not exceed the size of a pen.