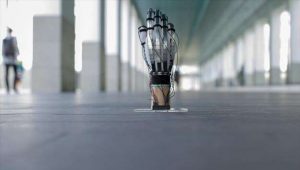 Scientists at “EPFL (Ecole Polytechnique Federale de Lausanne)” and “ETH Zurich” developed an ultra-lightweight glove, weighing less than 8 grams per finger, that allows users to “touch” and manipulate virtual objects. The system, according to its creators, provides extremely realistic “tactile feedback” and can be operated with batteries, giving unprecedented freedom of movement.

The creation of technologies to ensure better immersion in virtual environments is the subject of many researchers and engineers around the world as the “VR” makes important steps. In this context, the work of “EPFL” and “ETH Zurich” researchers, the gloves of whome are capable of producing 40 Newtons of power on each finger with 200 volts and a few milliWatts, is also moving. It also has the ability to run on a very small battery and is extremely thin (just 2mm thick), which means very high levels of precision and freedom of movement.

“We wanted to develop a lightweight device that, unlike existing virtual reality gloves, does not require a bulky extrusion, thick wires etc.”

The particular glove, called “DextrES”, has been successfully tested on volunteers in Zurich and consists of nylon, with thin elastic metal strips on the fingers. These strips are separated by a thin insulator. When the user’s fingers come into contact with a virtual object, a voltage difference is applied between the metal strips, resulting in force that blocks the movement of the user’s finger. When the voltage drops the metal strips glide smoothly and the user can once again freely move his fingers.

At present, the glove is powered by a thin cable, but because of the low voltage and energy required, there is no reason why a small battery should not be used.

“Low energy requirements are due to the fact that it does not create movement but is blocked,

Researchers plan to conduct additional tests to see what level they need to simulate real conditions to achieve a fully realistic experience.

“The human sensory system is extremely sophisticated and very complex. We have many different types of sensors at very high density in the joints of the fingers and the skin. As a result, creating “realistic feedback” when interacting with virtual objects is a very demanding problem that has not yet been solved. Our work makes a step in that direction”,