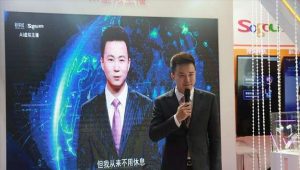 The world’s first artificial intelligence news-presenter made his debut in China as part of the “World Internet Conference” in Zheching Province.

According to the “Xinhua” agency –Chinese developer, along with the Chinese search engine company “Sogou.com”– the particular presenter uses “the most advanced” artificial intelligence technology and has a male face and voice, and can make plausible expressions and to take “human” actions. He is trained through his own videos and is able to read texts normally, as would a human speech announcer.

According to “Xinhua,” he is now a member of its journalist team, working 24 hours a day on its official website and on various social networking platforms, cutting costs.

The “synthetic presenters” will combine with “artificial intelligence technology” image and voice of human announcers (at present, model for the announcer was the real presenter Qiu Hao, while another one was presented). Always according to the Chinese agency, they will be able to synthesize verbal speech, lip movement and facial expressions, while they will speak Chinese and English.

As noted by the “South China Morning Post”, well-known news-presenters are a major asset for US media, so they get sluggish wages. However, prestigious news-presenters in China are less paid in general because they work for state TV channels (although they often have extra revenues from other activities).

According to the Chinese newspaper, synthetic presenters might at some point question the human primacy in the industry, given their ability to work 24 hours a day; it is enough for human journalists to feed them with text. Also, “Xinhua” emphasizes that such speakers are particularly useful in transmitting breaking news quickly and accurately.